To share your memory on the wall of Arnold Eugene Cummins, Sr., sign in using one of the following options:

Provide comfort for the family by sending flowers or planting a tree in memory of Arnold Eugene Cummins, Sr.

Provide comfort for the family by sending flowers or planting a tree in memory of Arnold Eugene Cummins, Sr.

Family and friends will gather to celebrate his life at 10:00 AM on Saturday, August 1, 2020 at a graveside service at the Andrews West Cemetery with... Read More
Arnold Eugene Cummins, Sr. , 86, of Allen, Texas passed away on July 28, 2020 in Allen.

Family and friends will gather to celebrate his life at 10:00 AM on Saturday, August 1, 2020 at a graveside service at the Andrews West Cemetery with Rev. Kevin Bushart of Means Memorial United Methodist Church officiating. Inurnment will follow. Cremation is under the personal care of McNett Funeral Home. Visitation will be from 9:30 AM-9:00 PM on Thursday at the funeral home. The family will receive friends from 9:30 AM-11:00 AM on Thursday. Please visit www.mcnettfuneralhome.com for obituary information, visitation, service details and family pictures or videos.


Arnold Eugene Cummins, Sr. was born on September 10, 1933 in Monahans, Texas to James Wayne and Velma Brown Cummins. He graduated from Iraan High School in 1952 and from The University of North Texas with a B.B.A. in 1955.Gene served his country in the United States Navy on the aircraft carrier USS Kearsarge from November 1955 until his honorable discharge in November 1957. He married Thelma Secor on August 6, 1960 in Delmar, New York. Gene and Thelma moved to Andrews in 1968 to raise their family. He went to work with Ira Lee Brannan and after obtaining his C.P.A., they formed Brannan, Cummins and Company. Spending time at Lake City in the summertime, camping and traveling were some of the things he and Thelma enjoyed doing together. Thelma was the light of his life and he missed her greatly after her passing in 2010. Gene was a member of the Means Memorial United Methodist Church, Texas Society of CPA’s, Andrews Rotary Club, Andrews Chamber of Commerce where he served as Treasurer and was named Man of the Year and was a Director for Roberts News Publishing. Golfing, antiquing and woodworking were some of the things he liked to do in his free time. He was known by his family and friends as a kind and gentle man and a great storyteller. His family meant the world to him and he honored them by leaving a great legacy. He will be dearly missed. Gene was preceded in death by his parents and his brother, James William Cummins.

In lieu of flowers the family requests donations be made to the Alzheimer’s Association at www.alz.org
Read Less

To send flowers to the family or plant a tree in memory of Arnold Eugene Cummins, Sr., please visit our Heartfelt Sympathies Store.

We encourage you to share your most beloved memories of Arnold Eugene Cummins, Sr. here, so that the family and other loved ones can always see it. You can upload cherished photographs, or share your favorite stories, and can even comment on those shared by others. 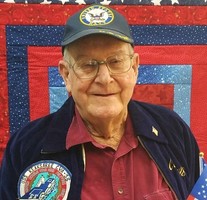