To share your memory on the wall of Melanie Lyn Wilson, sign in using one of the following options:

Please visit www.mcnettfuneralhome.com for obituary information, visitation and service details, and the family pictures or videos. Cremation is under the personal care of the McNett Funeral Home.

Melanie was born on May 13, 1974 to William Kenny and Linda Kay (Bromley) Hooper in Andrews, Texas. She attended school in Andrews and graduated in 1992. She continued her schooling and attended the University of Texas of the Permian Basin in Odessa, Texas and graduated with a bachelor’s degree in finance. Melanie met and married Larry Wilson in Andrews on April 12, 1991 in Andrews, Texas and have been married for 28 years. Melanie was a member of Cornerstone Church in Odessa and she loved to study the Bible. She enjoyed spending time with her family especially her grandchildren who mean the world to her. She also enjoyed going to the salon, playing Wahoo, and watching her favorite football teams the Texas Longhorns and the Dallas Cowboys, and the show Rosanne. Melanie was preceded in death by her parents, William Kenny and Linda Kay Hopper and a brother, Michael Hooper.

To send flowers to the family or plant a tree in memory of Melanie Lyn Wilson, please visit our Heartfelt Sympathies Store.

There are no events scheduled. You can still show your support by sending flowers directly to the family, or planting a memorial tree in memory of Melanie Lyn Wilson.
Visit the Heartfelt Sympathies Store

We encourage you to share your most beloved memories of Melanie Lyn Wilson here, so that the family and other loved ones can always see it. You can upload cherished photographs, or share your favorite stories, and can even comment on those shared by others.

The Alexander Family, Myrtle Dillard, and other have sent flowers to the family of Melanie Lyn Wilson.
Show you care by sending flowers

Posted Apr 10, 2020 at 03:39pm
I have know Melanie since she what a very small child when we went to Church together, of course I was a teenager and did not know her that well. Our families became entwined with the marriage of Michael and Becky and will forever be combined with the birth of Caylyn Joy Hooper. We have been together at birthdays and other meaningful days. Larry and I worked together at ExxonMobil for many years. Melanie had a fire about her and lived her life with a passion. She was very good at her job and LOVED those grandsons so much. Her loss will leave a hole in many lives, the boys and Caylyn. Many prayers for the whole Wilson family.
Comment Share
Share via:
KT

Posted Apr 10, 2020 at 10:43am
Thinking of all of you today. Our hearts go out to each of you. Melanie was such a sweet and caring person. I pray that God will wrap his arms around you all and bring comfort to you just knowing that Melanie is in such peace and joy celebrating with all her family there. Just know that I am here for you, if I can do anything. Love to you my family!
LJ & Kathy Turner
Comment Share
Share via:
TF

Posted Apr 09, 2020 at 11:30pm
Her children rise up and call her blessed; her husband also, and he praises her: Many women have done excellently, but you surpass them all. Prov 31 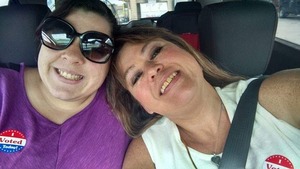 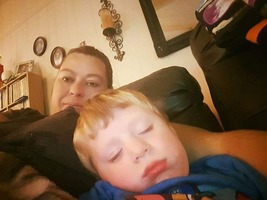