To share your memory on the wall of Hiram Hubert, sign in using one of the following options:

Family and friends will gather to celebrate his life at 11:00 AM Saturday, November 30, 2019 at the First Baptist Church, 201 NE 2nd Street, in Andrews. Interment will follow in the Andrews West Cemetery. Visitation will be 12 – 8 PM on Friday at McNett Funeral Home, and the family will receive friends from 5 – 7 PM at the funeral home. Please visit www.mcnettfuneralhome.com for obituary information, visitation and service details, and family pictures and videos.

Hiram was born on February 7, 1948 in Brownwood, Texas to Lucious Hubert, Sr. and Ilena Jones Hubert. He began his education at the all-black Lincoln School, and they were integrated with the Andrews High School, where he graduated in 1966. While in high school, he played on the first AHS basketball team to win District, Regionals, and make a trip to State. He was the first AHS basketball player to be named to the UIL All-State Team. He graduated from Howard College in Big Spring, where he also played basketball. He proudly served in the United States Marine Corp during the Vietnam Conflict, where he was honorably discharged as Sergeant E-5. He earned his Bachelor of Science in Sociology from Sul Ross State University in 1973, where he also played basketball. He married the love of his life, Vivian Denise Francies on June 21, 1975 in Waller, Texas. He had worked for Texaco in Andrews and Midland for 28 years, where he served 18 years as a Production Supervisor and 5 years as the Business Partnering Coordinator for the Permian Basin. He served two terms as Andrews County Commissioner, Precinct #3, where he helped improve his precinct, equipment, buildings, parks, and challenge others in the community to do the same. He was instrumental in supporting many of the programs in the community and the Permian Basin throughout his life. He had served on the following boards or had been involved in: Andrews Strategic Action Program (ASAP), Andrews, Andrews County Veterans Memorial, Permian Basin Area Foundation, Andrews ISD Educational Improvement Council, Andrews Educational Foundation, Andrews Country Club, Midland Community & Senior Service Meals on Wheels, Andrews Chamber of Commerce, Midland Chamber of Commerce, Midland Hispanic Chamber of Commerce, Midland Chamber’s Task Force Committee, Mexican American Network of Odessa Loan Committee (M.A.N.O.), United Way, had been recognized as Citizen of the Year from the Andrews Chamber of Commerce, and was a Baptist.

Hiram was known to be very proud of the Andrews community and the Andrews Schools. He loved going to the beach, Christmas trips with the family, Dallas Cowboys, good food, and spending time with his neighborhood on Margarita Monday’s. If you knew Hiram, you knew he especially loved playing golf with his friends and his son, J. Chris, as well as golfing at Top Golf. He delighted in time spent watching J. Chris work on his Firebird. Also, he took great pride in visiting his son at his office and interacting with his patients as they came and went. Although, Hiram wasn’t a hunter he cherished the moments that he had reliving the hunting stories that J. Chris shared with him. He was known to be a great businessman, leader, communicator, and set the expectations for people and held them accountable, which his son and many others were mentored by him. He loved his wife, Vivian, very much and had been looking forward to meeting her eternally. He spent many days taking care of her gravesite and taking her flowers, especially on her birthday. He will be buried on her birthday, and the family knows this is where he would want to be. J. Chris is thankful for the childhood memories from his parents, and the excellent role models they were for their marriage, the community, and their work ethics. Being the youngest of three, Hiram looked up to and greatly admired his brothers. It was not uncommon to see Hiram and Lucious out together making their rounds in an effort to give back to the community that meant so much to them. When his beloved Vivian passed away, she told him three things: make sure our son finishes his Doctorate of Chiropractic, go buy your corvette, and take care of my mother.

Hiram is survived by his son, J. Chris Hubert and Jennifer Hill of Tyler, brother, Lucious Hubert, Jr. and wife, Mary, of Andrews, and sister, Lasonia Hubert of Andrews. He is preceded in death by his wife, Vivian, on June 27, 2004, his parents, and brother, Calvin Hubert.

Memorials may be sent to Andrews Educational Foundation to support the Andrews School system.
Read Less

The insignias listed here may be subject to copyright and/or trademarked. Those copyrights and trademarks are owned by the respective organizations.

We encourage you to share your most beloved memories of Hiram Hubert here, so that the family and other loved ones can always see it. You can upload cherished photographs, or share your favorite stories, and can even comment on those shared by others.

Posted Dec 03, 2019 at 12:15am
The Hubert’s have always been good friends of the fam..I’ve always admired all of them ... Hiram and I became real close in the last 3 yrs. And if I needed him he was always there for me. One of those times was when my granddaughter and I was on our way to Seminole I had a blowout, so I called Hiram and I always ask him was he busy.. And most of the time he replied , you know I’m always busy babe. So I told him about my situation and he said he would send someone to help me. Well in about 45 min. I looked in my side mirror and a white pickup pulled up and I said to my gd. That’s Hiram and then another white truck behind him said Andrews tire service and another truck and that was a guy from the Chevrolet dealership.. I said Wow Hiram came and he brought the whole town to help me ... What a blessing... I will miss Hiram bunches.. Zelda Brown...
Comment Share
Share via:

Posted Nov 28, 2019 at 10:31am
Hiram and I played on the 1966 Mustang basketball team. Hiram was the heart of our team! I will miss him as a team mate and friend. RIP Hiram, men like you don’t come around very often!
Comment Share
Share via:
T

Posted Nov 27, 2019 at 07:43pm
My prayers and condolences to my family during this time. Hiram was well loved and respected. Love from the Hubert family in Houston TX.
Comment Share
Share via: 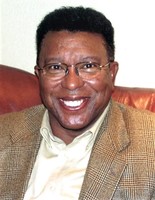 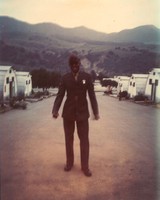 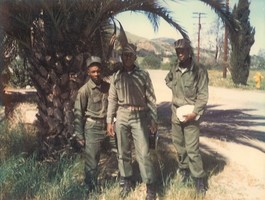