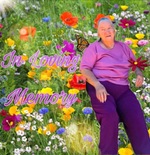 Frances Juanita Gilbo Ricard, 77, of Andrews went to be with her Lord and Savior Jesus Christ on Saturday, September 28, 2019 in Andrews surrounded by her loving family.

The family will be having a memorial service at 11:00 AM on Saturday, October 5, 2019 at the First Church of the Nazarene, 490 NE 1400, in Andrews with her sons, Claude and William Perhealth, officiating. Cremation arrangements are under the personal care of McNett Funeral Home in Andrews. Please visit www.mcnettfuneralhome.com for obituary information, service details, and pictures.

Juanita was born on April 8, 1942 in Anniston, Alabama to William Leon Gilbo and Mary Magdalene Dutton Gilbo. She was a member of the Church of the Nazarene, where she faithfully served in various positions over the past ten years. She accepted the Lord at a young age growing up in the Salvation Army. One of her fondest memories was being a part of the Youth for Christ Thousand Voice Choirs, where she met a young Billy Graham. Her parents opened and operated Salvation Army lodges up and down the East coast. She married Claude Perhealth on June 11, 1960 in Hampton, Virginia, and they had four boys, Joseph Michael, Claude Ray, William Leon, and Kenneth Emery. She later married John Jenkins in 1969, and they had four girls, Juanita Michelle, Joanna Lee, Ruth Ann, and Rosemary. She later married Leo Paul Ricard on November 9, 1984 in Marion County, Florida, who passed away in 1995. She was preceded in death by her parents, sister, Ruth Eva Gilbo, and daughter, Joanna Lee Jenkins. She also enjoyed going to the women’s ministry at House of Mercy Ministries in Andrews. She loved being with her children, grandchildren, and great grandchildren or talking to them by phone.

The most important thing was that she loved the Lord with all her heart and would invite anyone to accept Jesus Christ as their Lord and Savior today.