To share your memory on the wall of Brother Teddy M. Short, sign in using one of the following options:

Provide comfort for the family of Brother Teddy M. Short with a meaningful gesture of sympathy.

Family and friends will gather to celebrate his life at 2:00 PM on Tuesday, July 2, 2019 at Grace Baptist Church, 507 NE 4th Street, in Andrews. Interment will follow in the Andrews North Cemetery. The family will receive friends from 6 – 8 PM on Monday at McNett Funeral Home. Please visit www.mcnettfuneralhome.com for obituary information, visitation and service details, and family pictures or videos.

Teddy was born on January 16, 1938 in Oklahoma City, Oklahoma to Roy Lee Short and Lou Ella Shaffer. He had attended elementary school in Wink, Texas and graduated from Jayton High School in 1957, where he was known to be a great football player for the Jayton Jaybirds. He married Judy Lou Hawkins on March 3, 1959 in Jayton. He had worked as a Roughneck in the oil fields in his earlier years and enjoyed playing golf. He had worked at Lubbock Power & Light and Union 76 as a field operator in Jal, New Mexico. They had owned and operated “Panther School Store” Hamburger Place in Jal, New Mexico from 1966 – 1981. He went on an International Christian Crusade in January 1979 to Nicaragua and surrendered to the ministry on March 19, 1979. He had been the Pastor at Maljamar Baptist Church in Maljamar, New Mexico from 1979 – 1981, McKinney Acres Baptist Church in Andrews from 1981 – 1993, Greenfield Acres Baptist Church in Odessa from 1993 - 1998, First Baptist Church in Jal, New Mexico in 1999, and Grace Baptist Church in Andrews from 2000 – 2009. He enjoyed riding his Honda Goldwing motorcycle, Dallas Cowboys, Jayton Jaybirds, and tinkering in his shop. But most of all, he enjoyed ministering to many people with his faithful wife, Judy, beside him the entire time. He was a member of Grace Baptist Church in Andrews. He was preceded in death by his parents, an infant son, 3 brothers, and 2 sisters.

Memorials may be sent to the Alzheimer’s Association at https://www.alz.org/
Read Less

We encourage you to share your most beloved memories of Brother Teddy M. Short here, so that the family and other loved ones can always see it. You can upload cherished photographs, or share your favorite stories, and can even comment on those shared by others.

Joan Fowler, Jessie & Rosalinda Gonzalez, and others have sent flowers to the family of Brother Teddy M. Short.
Show you care by sending flowers

Posted Jul 02, 2019 at 02:38pm
Brother Ted you will be dearly missed by many people including me, if it wasn’t for my uncle to invite me to Grace Baptist I would have never met you. I was led to the Lord in this Church and Ted Baptized me there in that Church. Judy I am deeply saddened for you loss and you are in my Thoughts and Prayers at this time. Love You
Comment Share
Share via:
JF

Posted Jul 01, 2019 at 04:34pm
We are thinking of you during this difficult time. Please give your Momma and kids a great big hug from me. Loved your Daddy.

Posted Jun 30, 2019 at 11:23am
JD, please accept our heartfelt condolences, our thoughts and prayers are with you and your family during this difficult time.

Posted Jun 29, 2019 at 10:35pm
I am sadden for your loss but Heaven gained an Angel. May the Lord ease your sadness.
LeAnn Cox
Comment Share
Share via:
BG

Posted Jun 29, 2019 at 06:31pm
Where to start? There are so many memories it would be impossible to list them all. Ted and Judy have a part of our lives for a great many years, and I treasure each and every moment I spent with them both. Bro. Ted presided over so many ceremonies for us. He was there when Shamra was born, when she was dedicated to the church, and then for her marriage 21 years later.
He baptised both of my sons.
He presided over my brother's and my mom and dad's funeral services.
He has seen us through so many difficult, sad, and joyous times.
So many prayers were said by this man for my family, so many petitions to God on our behalf. These will never be forgotten or taken for granted.
Brother Ted, I hope that there was never a time that I saw you that I didn't tell you that I loved you or that my love and appreciation didn't shine through. You were greatly loved, and you will be greatly missed.
Go Rest High on That Mountain.
Comment Share
Share via: 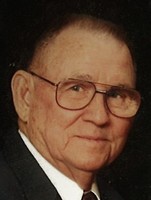 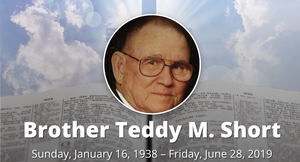