In Memory of
Clifford Claud
Holmes
1927 - 2017
Click above to light a memorial candle.
Memorial Candle Tribute From
McNett Funeral Home, Inc.
"We are honored to provide this Book of Memories to the family."
View full message >>>
Send Flowers
Menu

In the event that there is an error
in the information presented,
please contact the funeral
home by clicking here. 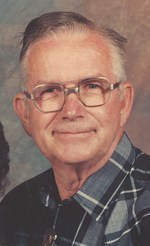 Family and friends will gather to celebrate his life at a graveside service at 10:00 AM Monday, May 8, 2017 in the Andrews North Cemetery with Pastor Robert Pase officiating. The family will receive friends on Sunday from 2 – 4 PM at McNett Funeral Home. Please celebrate his life by visiting www.mcnettfuneralhome.com.

Clifford was born on October 21, 1927 in Cromwell, Oklahoma to Claud Elmer Holmes and Fleacy Arvada Heath Holmes. He was raised in Cromwell and graduated from Cromwell High School in 1945. He served in the U.S. Navy during WWII. He married Donna Lee Neel on April 17, 1948 in Meade, Kansas. They had lived in Meade and Rolla, North Dakota, where he had worked for GSI Company. They moved to Andrews in 1951, where he had worked for Amoco for 36 ½ years and retired as maintenance manager. He had also worked for Fitts Electric in Andrews. He was a member of the Texas State Guard, VFW Lodge #4372 in Odessa, and had served as head usher at Faith Lutheran Church in Andrews, where they are members. He was preceded in death by his parents and brother, Wayne Holmes.

Memorials may be sent to Faith Lutheran Church or the VFW Lodge #4372.

To send flowers to the family or plant a tree in memory of Clifford Claud Holmes, please visit our Heartfelt Sympathies Store.