In Memory of
Cecil Wayne
Martin
1951 - 2017
Click above to light a memorial candle.
Memorial Candle Tribute From
McNett Funeral Home, Inc.
"We are honored to provide this Book of Memories to the family."
View full message >>>
Send Flowers
Menu

In the event that there is an error
in the information presented,
please contact the funeral
home by clicking here. 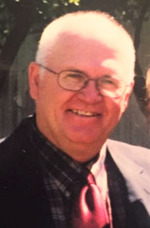 Family and friends will gather to celebrate his life at 2:00 PM Saturday, February 11, 2017 at McNett Funeral Home Chapel in Andrews with Pastor Brant O’Connor of Andrews officiating. Interment will follow in the Andrews North Cemetery. The family will receive friends on Friday from 6 – 8 PM at the funeral home. Please celebrate his life by visiting www.mcnettfuneralhomecom.

Cecil was born on September 28, 1951 in Odessa to Archie Martin, Sr. and Violet Faye Howell. After marrying Argus Collie, the family moved to Andrews and graduated from Andrews High School in 1969. He married Carole Ann Selby on July 25, 1969 in Andrews. He had worked for Cass Electric, Fitts Electric, and Kay & Company Electric. He had worked for Texas Electric and TXU Electric, which is now Oncor Electric from 1975 – 2010. They moved to Granbury in 2003, but still spent time back and forth from Andrews. Cecil loved baseball and had played on a men’s softball team. He had coached his daughter’s in softball and coached his son in baseball, while they were growing up. He loved woodworking, puzzles, fishing, and Texas Rangers Baseball. But most of all, he loved being around and spending time his family, children, and grandchildren. Cecil was Baptist. He was preceded in death by his parents, step-father, and his brother, Archie Martin, Jr.

Cecil is survived by his wife, Carole of Andrews, 2 daughters, Carmen and husband Bill Phillips of Granbury and Stacey and husband Wayne Manning of Andrews, 1 son, Corey and wife Laura Martin of Dallas, 2 sisters, Mary Jane Martin of Andrews and Elizabeth McBeth of San Antonio, 9 grandchildren, Courtney, Taylor, and Preston Phillips, Hailey Burgen, Hunter, Clay, and Peighton Manning, Chase and Allie Martin, and a great grandchild on the way.

Memorials may be sent to the American Diabetes Association at www.diabetes.org.

To send flowers to the family or plant a tree in memory of Cecil Wayne Martin, please visit our Heartfelt Sympathies Store.